The history of four families: Maloratsky, Kagansky, Sagalov and Goldfarb

РУССКИЙ
On this website you will discover history of four families - Maloratsky, Kagansky, Sagalov and Goldfarb. It is divided into four chapters.

This work is the continuation of the efforts of our dear relatives Elena and Lev Maloratsky and a fruit of the joint efforts of many dear relatives and friends.
Materials for the Sagalov and Goldfarb families are the main focus of this site, they were collected and summarized by Ilia Goldfarb and his wife Irina. Chapter one - the history of the Maloratsky family was borrowed (copied) from Lev Maloratsky's website http://maloratsky-vinitsky.weebly.com/. Chapter two - the history of the Kagansky family is partially borrowed (copied) from Lev Maloratsky's website http://maloratsky-vinitsky.weebly.com/, and partially supplemented with the help of Arnold Kholodenko with materials from his family archives. Chapter three - the history of the Sagalov family has significantly benefited from the tireless search by Oleg Sagalov in the Kiev Oblastnoy and Historical Archives. We are very grateful to everyone for their help and support.

Thousands of archival documents, photographs and explanations are collected on our website on the basis of which we reconstructed in detail the family trees of the Goldfarb, Sagalov, Maloratsky, Kagansky and Kaganovsky.

Our main sources:
If someone finds any omissions/inaccuracies or would like to make any additions to the history of the families, we will be very grateful and will incorporate this input into our family tree. We hope that stories on this website will be of interest to our descendants and in time they will be able to continue this work.

News, Events & Tips:
How to continue the search for their ancestors of Jews born before 1795?
How did the Jewish Austrian surnames appeared in Ukraine and Poland?
How to find a Family nest for Jews with surnames from Austrian Galicia? 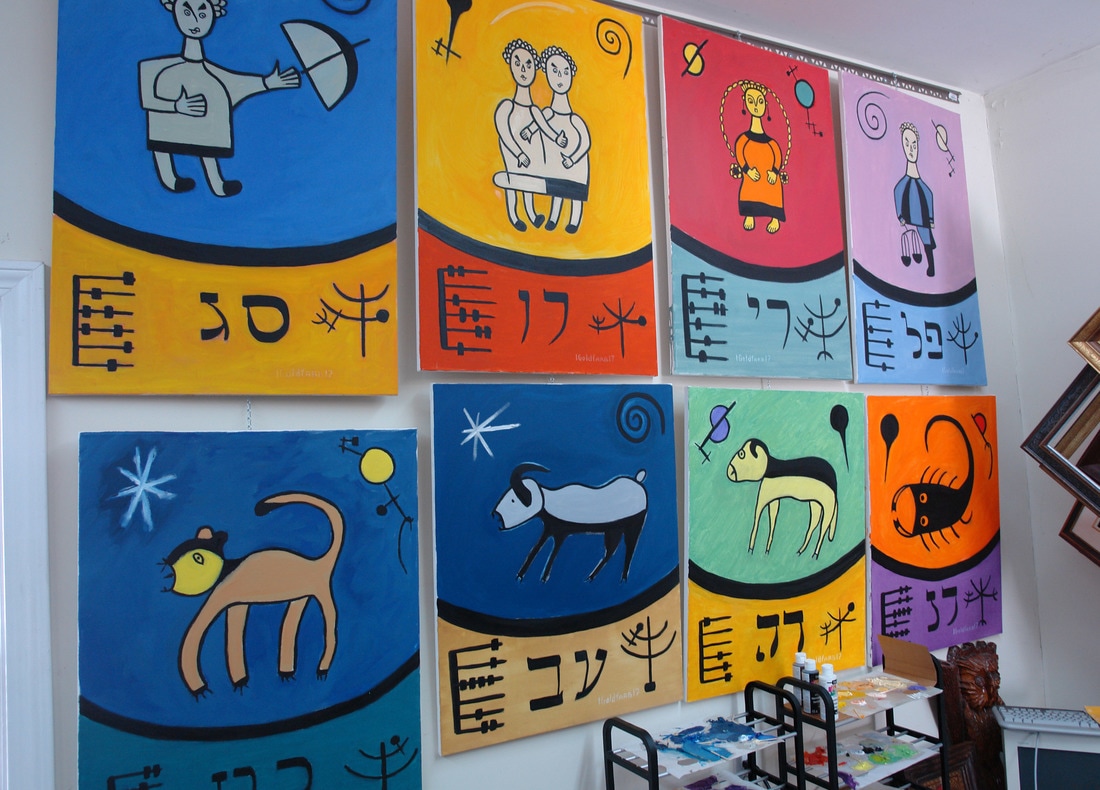 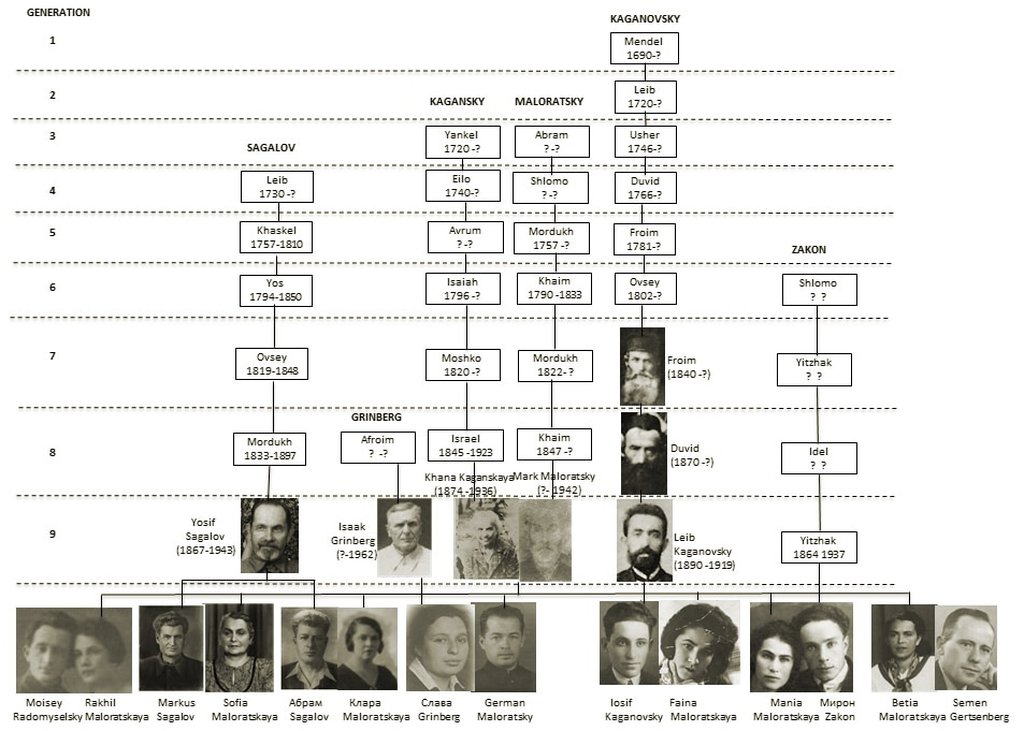 How to continue the search for their ancestors of Jews born before 1795.

Let's start with the history of the Revision tales.
"Tales" in Russia in the XVII - early XIX centuries called official records of explanations or testimonies of various persons. In order to place the burden of maintaining the regular army on taxable estates, Peter I, by a decree on November 26, 1718, demanded “Take fairy tales from everyone (give a one-year term), so that the truthful would bring how many people have a man who has sex in his village, announcing to them what he who hides will be given to the one who announces. ”
The audit carried out under Peter became the first. Subsequent audits were held in the following terms: 2nd in 1744-1746; 3rd in 1762–1763; 4th in 1782; 5th in 1794-1795; 6th in 1811; 7th in 1815–1816; 8th in 1833–1834; 9th in 1850; 10th in 1857-1858
Before the partition of Poland in 1795, there were practically no Jews in Russia. Therefore, in revisions until 1795, Jews do not meet. At that time, Jews lived in the Polish-Lithuanian Commonwealth, but there were not very many of them there either - Bogdan Khmelnytsky and Koliivshchyna destroyed most of them in the territory that later became Ukraine. That is, by 1795, when this territory was transferred to Russia, Jews lived on it.
Nominal censuses of the Jewish population were made by the Russian authorities with the aim of levying taxes on Jewish kagals, starting in 1795, after the third division of the Commonwealth. Moreover, the common people in Russia at that time did not have surnames, surnames appeared later, after the decree of 1804 *). Therefore, most Jewish pedigrees in Ukraine begin with the ancestors indicated in this census (1795).

The question is how to continue the search for their ancestors born before 1795?
The following considerations should help answer this question.
Surprisingly, we found a hint in the work of the Ukrainian genealogy Viktor Doletsky, who is the author of an interesting project on creating a genealogical tree of a whole separate village. He came to an interesting generalization - most of the inhabitants of this village turned out to be second cousins ​​and fourth cousins. At the same time, we know that Christians and Catholics lived where they were born in villages, villages and cities. But the Jews, until 1808, lived on a different principle - they lived in the places of business that they conducted, being, as a rule, shinkars in villages and villages. At the same time, one small family rented the tire. Shinkar, the head of this family, belonged to a certain kagal, usually in a larger city, where the synagogue and the Jewish community functioned. Where can we find relatives of this shinkar? Most likely they belonged to the same community and the same kagal, only lived in neighboring villages and villages, renting other shinks and wineries.
Common sense dictates that, after 1804, if people living in the same village had the same surnames, then they were probably relatives. This common sense helps in building a family tree for Christians and Catholics. But for the Jews it was more confusing.

In the Russian Empire, the obligation of hereditary surnames was introduced by the corresponding article of the special “Regulation on Jews”, approved by the imperial Decree of December 9, 1804, Article 32 of this Regulation read: “In this census, every Jew must have, or accept his famous hereditary name, or a nickname, which should already be preserved in all acts and records without any change, with the addition to that name given by faith or at birth, this measure is necessary for the best device of their Civil th state, for convenient outpost of their own, and to parse the litigation between them. " In 1808, the Senate re-ordered "all Jews to accept ... certainly a known last name or nickname, if that has not been done yet."

Consider how Jewish surnames were formed. (for more details see the site of Leva Maloratsky​  https://improbablefamilystories.weebly.com/)   The fact that Jews have an overestimated percentage of surnames from the names of settlements confirms the hypothesis that fairly close (cousins ​​and second cousins) relatives could and actually had different surnames.
For example, if you take the name of the Sagalov until 1804 (in 1795), they all lived in different villages and villages located near Fastov. In 1804, the "Regulation on the device of the Jews." From January 1, 1808, "no Jew in any village or village can maintain any rent, shreds, taverns and inns ... and even live in them." And when in 1808 they were relocated to Fastov, they all had the surname Sagalov, since they were all cousins ​​and second cousins ​​and chose the surname according to the religious principle (Levites). But, for example, we did not find such cousins ​​and second cousins ​​at the Maloratsky after moving to Radomysl. This is explained by the simple fact that they lived there, and they had other surnames, such as Radomyslsky or Potievsky.
In this case, the relationship can be confirmed by the following circumstances: For example, the ancestors of the Maloratsky, Radomyslsky and Potievsky families lived in villages and villages close to Malin and Radomysl until 1804, and the descendants of the Potievsky family (according to the Revisky tales 1795, 1816, 1818, 1834, 1850) had 80% names that coincide with the names of the descendants Maloratsky and Radomyslsky.

As a result, when we know the names and patronymics of cousins ​​and second cousins, we can continue the search for the reconstruction of the family tree for several generations of the 18th century.

*) On July 23, 1787, the Austrian Emperor Joseph II passed a law according to which all Jews within the borders of the Habsburg empire were required to have permanent names. In accordance with the law, "surname" was to be completed before January 1, 1788.
Therefore, in 1795, Jews should already have surnames, but surnames in Russia were not used for Jews then. And then, when the decree was issued on assigning surnames to Jews in Russia, the majority chose new surnames, but some retained old surnames, perhaps because they paid bribes to Austrian officials for pleasantly sounding surnames (Goldfarb, Herzenberg).

How did the Jewish Austrian surnames appeared in Ukraine and Poland.
The history of the settlement of Goldfarb in Galicia, Poland and Ukraine.
After a thorough study of historical and archival documents of the late XVIII century, we came to the conclusion that two cities can claim the title of Goldfabs Clan Nest: Lublin and Przemysl. Although there is a high probability that the Goldfarb Tribal Nest was in Przemysl.
In total, until 1795 we found 10 records mentioning the last name Goldfarb in Przemysl and 2 records in Lublin (in the database “Jewish Records Indexing - Poland” (Jewish Records Indexing - Poland).
Until 1815, we found a total of 48 records mentioning the last name Goldfarb. Of these, 34 entries in Przemysl, 9 entries in Lublin, 3 entries near Krakow and 2 in Volyn - Kremenets. That is, we can assume that our ancestors came from Przemysl and Lublin.
Some of the surnames taken indicated the occupation, others reflected the nature of the character or appearance of their carriers. However, most of the new surnames were arbitrarily derived from various words of the German language, while many of these surnames were of an “ornamental” nature.
Many new surnames were composed of two German roots - Goldfarb, Weinstein, Goldwasser, etc.
At this time, changes occurred in the organization of the Jewish community and its living conditions. The community was subject to Austrian laws, according to which restrictions were imposed on Jewish trade, as well as on Jewish marriages.
The tax burden during Austrian rule was heavy. The taxes on meat taxed by Jewish trade were as follows: for each kilogram of meat there were 3 cruisers, 2 cruisers for a pigeon, 14 cruisers for a geese, 6 cruisers for a chicken or duckling and 20 cruisers for a swan. Duties were assigned to the candles a piece. And every Jewish family lit two candles every Saturday and holiday.
And probably many Jews were looking for places with more liberal laws that still remained in Poland. This may explain how some Goldfarbs, who only got their surname, decided to move to Poland: to Lublin, Kolbushevo, Staszow, Tarnow, Kremenets and Chernyakhov.

After the annexation of the new Polish territory, following what they did to the Galician Jews, the Austrian authorities, in the process of secularization, issued a series of decrees that allowed Jews to obtain civil rights. Thus, the Jews were forced to add Polish surnames to their Jewish names, but they were allowed to choose their own surnames, unlike Galicia, where the bureaucracy determined the surnames. Starting from this period, these surnames have been preserved to this day, such as: Tchaikovsky, Lubelsky, Rabinovich, Davidovich, etc. Therefore, it can be assumed that the Goldfarbs recorded in these cities moved there from Galicia (Przemysl).
Goldfarb settlement map for Galicia, Poland and Ukraine. 1780-1830 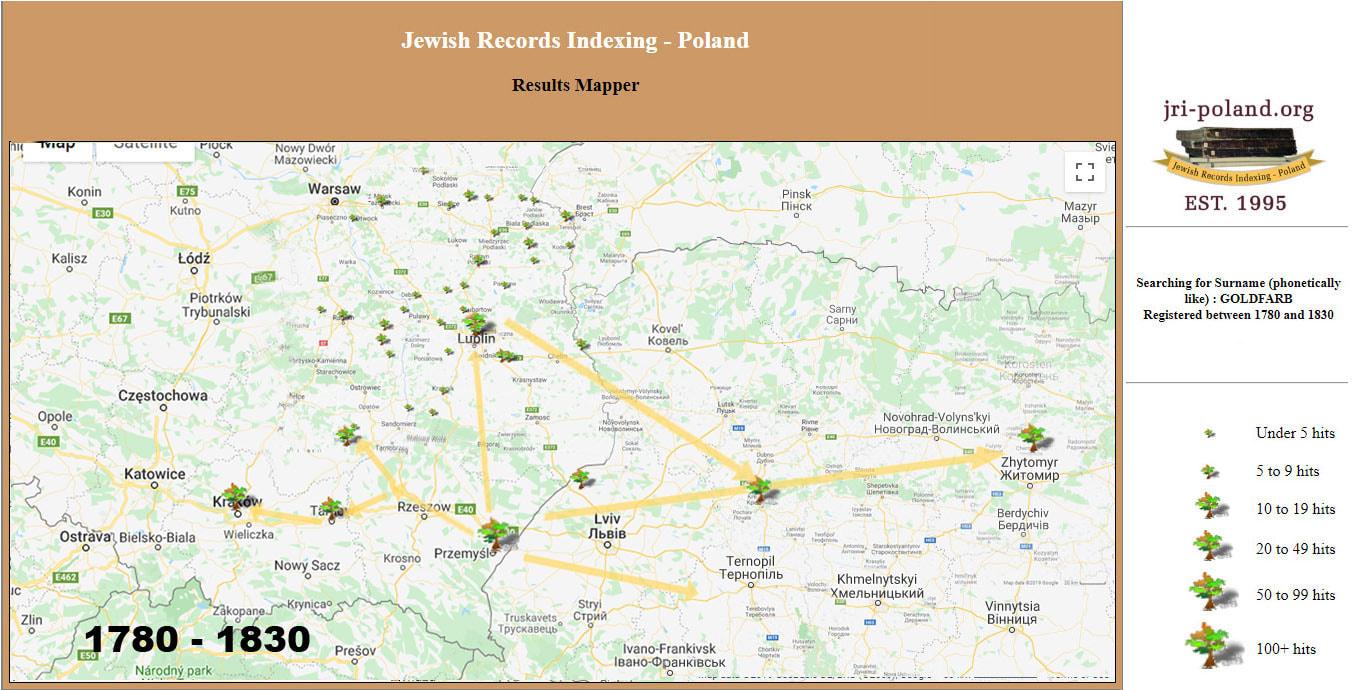 How to find a Family nest for Jews with surnames from Austrian Galicia?

All these constructions help to conclude that if most of the records in the database "Jewish Indexing Reports - Poland" by surname before 1815-1830 were concentrated in one place (city), then this place was probably the Family nest of this surname.
Proudly powered by Weebly